Paul Banwell is a leading specialist in tattoo removal, providing this service from his Harley Street clinic in Marylebone, London.

Mr Banwell is an expert in tattoo removal, tattoo excision and laser tattoo removal and his reputation sees clients from around the UK contact him for these services.

Tattoo removal itself is a popular procedure that is affordable and leads to excellent results.

The Popularity of Tattoos – and their removal

The huge increase in tattoos in recent years has inevitably been accompanied by an increase in demand for tattoo removal. 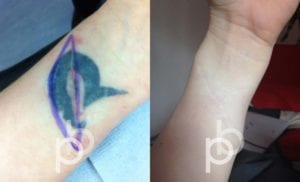 In the UK, the number of tattoo parlours has more than doubled in recent years, in London alone there are now many hundred. Whereas tattoos were once niche, they are now mainstream – although no precise figures exist it is believed there may be 20 million people in the UK with tattoos.

Walk down any London street and you will see dozens of people with visible tattoos with an array of ink colours, inevitably, sometimes people come to wish these tattoos were less visible.

In days past, there was a sense that tattoo removal was of poor quality, expensive and invasive. A tattoo really was for life.

Nowadays, through the techniques available to the skilled cosmetic surgeon, it can be as if the tattoo was never there, the tattoo ink just a memory.

Tattoo removal in London is now a popular request.

Why Remove Your Tattoo

The reasons people want to remove a tattoo and seek expert help from a clinic are varied.

Some will just grow tired of a tattoo, for others it may become a reminder of something – or someone – they would rather not remember.

Some might be holiday tattoos, perhaps a spur of the moment decision to remember a great time. In the cold light of day, taking the tube to work, the tattoo can seem a little less ‘you’.

Ultimately, it doesn’t matter why someone wants a tattoo removed and it is not something the surgeon will press you on at consultation – though they are of course happy to chat if you wish to share the story of your now-regretted tattoo.

What matters is that it can be gone. You don’t have to have the tattoo re-worked, turned into something more appropriate. Much as we all love the work of shows like Tattoo Fixers, sometimes you want to get rid of a tattoo rather than transform it.

The precise process to remove tattoos will vary, depending on the size of the tattoo, where it is on the body, skin types and its shape.

In a consultation, Mr Banwell would suggest what he believes to be the best option for treatment, why this is the most effective choice and outline the results achievable. He would of course also answer any questions.

Surgical excision refers to the physical cutting out of the tattoo, the resultant wound then stitched back together.

However, depending on the size of the tattoo it may not be possible to do this in a singular procedure and so it is done in stages – serial tattoo excision. For large tattoos there will also be cases where skin grafting is the only suitable treatment.

Ultimately, you do not need to know which method is most suitable, that is the surgeon’s responsibility. Choosing a surgeon such as Mr Banwell who is a true expert in this field ensures that the right decision will be made and your tattoo will be removed as effectively as possible.

Sending a photograph of the tattoo is often helpful enabling Mr Banwell to see its size and position.

“It is very gratifying to see that such a simple procedure can have such a major effect on someone’s well-being”. Letter from patient.

Key Information Relating to the Removal of a Tattoo

Length of operation – typically, these procedures take between 30 minutes and an hour, though it will be longer for large tattoos or those in positions that make surgery more complicated.

After care – the wound will be dressed with micropore tape. You can get wet by showering or washing but should not soak the dressing in the bath.

The tape should be fully dried after you wash. The tape will stay in place until stitches are removed. In some cases, you will be given antibiotics medication.

Recovery – you can return to office work or similar the following day. Stitches will be removed after one to two weeks, though Mr Banwell often opts for dissolvable sutures. You can drive the following day, but should avoid strenuous physical activity for two weeks,

Complications – this is a reliable, predictable procedure with a low complication rate.

Cost – The price for tattoo removal is from £700 at the time of writing.

You might also have seen Paul on TV or other media outlets – a pioneer and leading voice in the field of cosmetic surgery he is in demand by major publishers and TV networks.

Located within minutes of Regent’s Park underground and Oxford Circus as well as Marylebone Station, the clinic is easy to find and just a short walk or inexpensive taxi journey.

The clinic is easy to reach – it is around a five-minute walk from Regent’s Park underground station and 10 minutes from Oxford Circus.

Harley Street is named after Thomas Harley, Lord Mayor of London in 1767; however, it became established as a home of medical excellence from the 19th century.

Lionel Logue, the speech therapist who helped King George VI – and the basis of the film The King’s Speech – had a practice at 146 Harley Street, as did many other great names in medical disciplines.

Mr Banwell explained the details of my procedures in a professional and sensitive manner. He took the time to put me at ease and answer all my questions in a way that I could understand. Each step of my treatment from the initial consultation through to its conclusion was supported by professional who with their support enables me to have an extremely smooth journey through my procedures. For the first time in my adult life I am happy in my own skin. I would recommend Mr Banwell to anyone who has been thinking of cosmetic surgery in a heartbeat. Through his skill and understanding of the female body, he carries out his profession with the utmost care and consideration.

I had my brachioplasty in May and the surgery was very successful. The cosmetic appearance was quickly noticeable, with no complications arising from the procedure. I would certainly recommend Mr Paul Banwell and his team to all my friends, as they were extremely helpful and friendly.

I asked around and was told that Mr Banwell was the best in his field. I don’t know what my expectations were but the result was great, all my friends think my eyes look brighter and more open. I had no bruising which I was told I might have. Mr Banwell and his team excelled in making my life very easy for me, with arrangements and liaising with the hospital which didn’t always have my details correct, they were very helpful and answered all my questions, nothing was too much trouble. Mr Banwell put me at ease and I was not worried about the operation at all.

Mr Banwell was highly recommended by a friend of a friend. She was very satisfied with results which I witnessed. I trusted what I heard and what I saw. My meetings with Mr Banwell only reassured me further. Mr Banwell offered additional discussion time pre op & several follow ups post op. His admin team were 100% helpful and efficient. His manner was approachable and accessible. I would not hesitate to recommend his professional expertise, competitive cost and charming manner. At no point did I feel judged, intimidated or overwhelmed. This was an incredibly positive experience, many thanks to Mr Banwell and the rest of the team.

The surgery is very neat with minimal scarring.